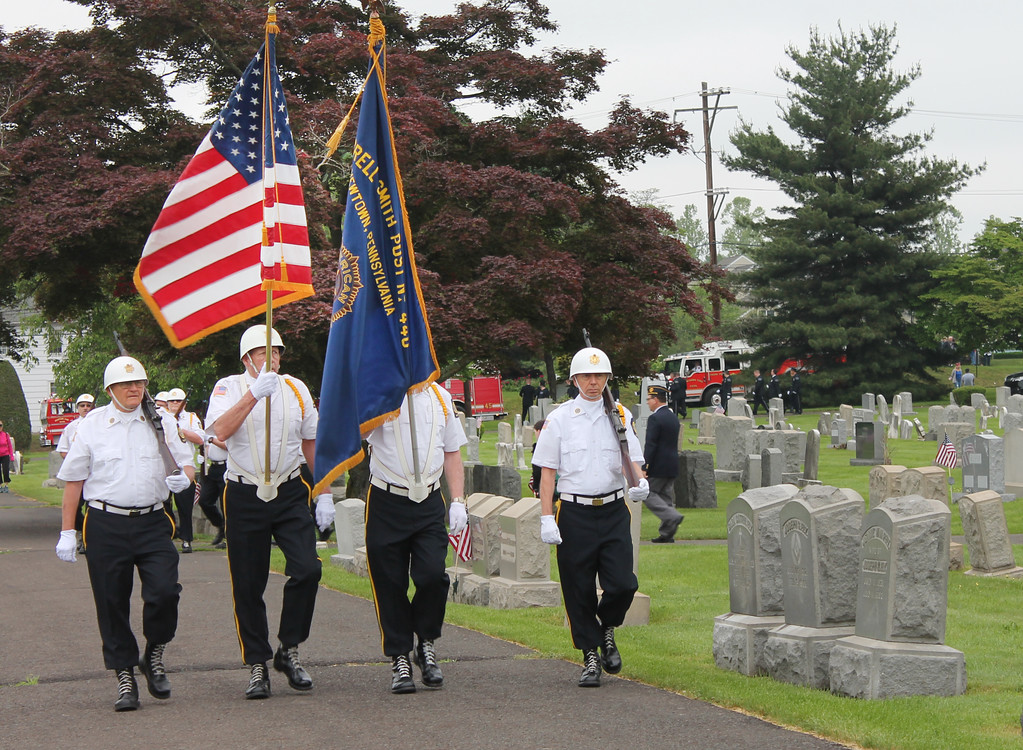 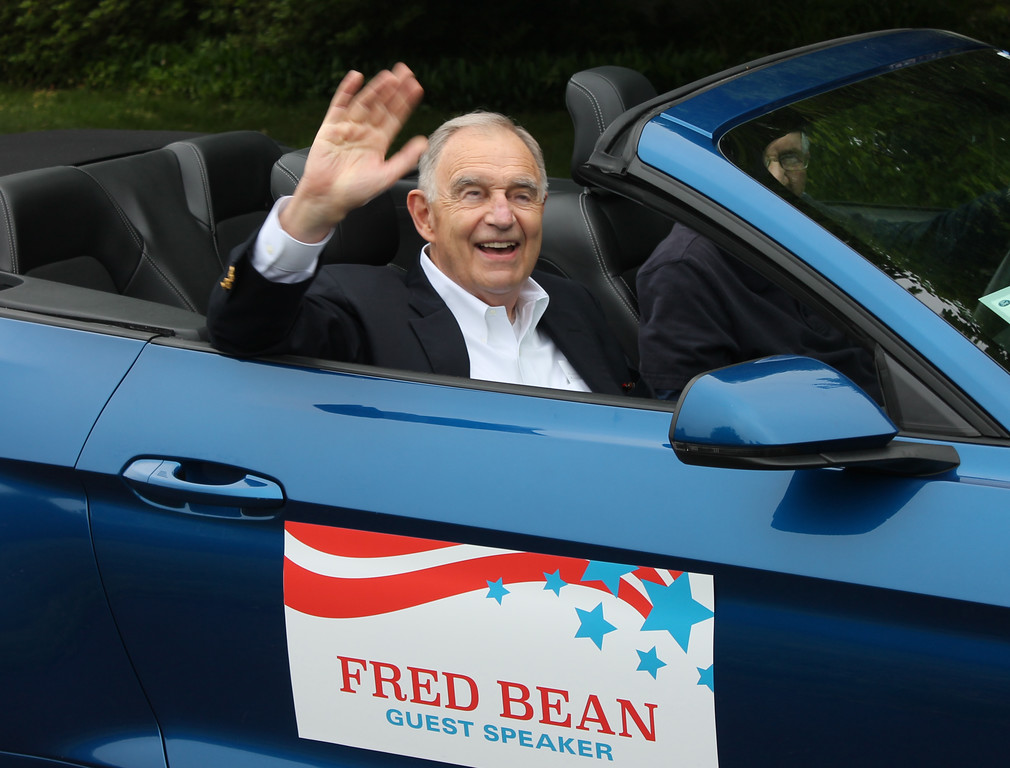 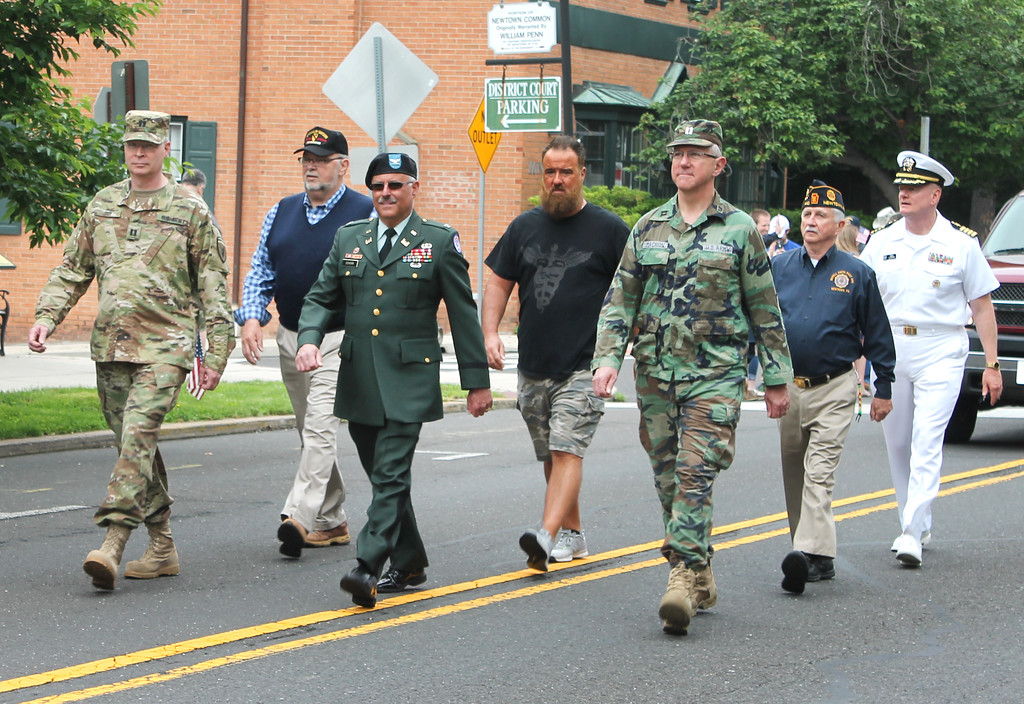 NEWTOWN >> From the solitude of the Newtown Cemetery to Veterans Plaza on Historic State Street, Taps split the morning air as Newtown remembered the fallen on Memorial Day. Pausing first at the gravesite of Morell Smith, Newtown’s only native son who died fighting for his country in WWI, and then at the World War I monument at the Newtown Library Company, veterans from American Legion Post 440 laid wreaths and saluted the men and women who gave their lives in the cause of freedom. A century ago this October, Smith was declared missing in action and later declared killed on the muddy battlefields of France. He was the only Newtown resident killed in World War I and his legacy sparked Newtown’s then newly-formed American Legion Post No. 440 to be named in his honor - a distinction still held today. The son of Dr. Charles Smith and Mrs. Ann Smith of Newtown, Morell Smith was killed while patrolling with three other men at daybreak. According to newspaper reports, the volunteer patrol moved through a wooded area “in the cover of dawn,” only separated by a few yards when “machine gun snipe opened up.” Three of the men were killed, with the other soldier escaping uninjured with bullet holes in his backpack. Smith’s death was “instantaneous,” but it would take six years for that message to reach his family and community. Just weeks before his death, Morell wrote his family, thanking them for sending “the photo of the Red Cross workers in Newtown” and describing the vibrant Bastille Day activities in France. He affectionately professed that more letters were on the way and championed his role as an American fighter. As the town remembered Smith and its other fallen heroes on Monday, they waved flags and cheered as local veterans led the annual Newtown Memorial Day Parade through town bearing the the colors and looking sharp in their military uniforms. Joining the veterans for the parade was the award-winning Council Rock High School North Marching Band, which performed a musical salute to Armed Services as they marched through town with flags twirling and instruments playing. The band was followed by the Newtown Fire Association, the volunteers marching by in their snappy dress uniforms. Local politicians also joined the march, including State Rep. Perry Warren, Mayor Charles Swartz and officials from Newtown Township and Newtown Borough. The parade also included local Scout Troops, the Council Rock Newtown Baseball Association, the 1st Volunteers From Crossing Community Church, the Newtown Ambulance Squad and much more. At the Newtown Borough Hall, festively decorated in red, white and blue bunting, the parade paused for a brief Memorial Day ceremony and to lay a remembrance wreath at Veterans Plaza. Post 440 Chaplain Chuck Resch led the gathering in prayer, remembering “all those who gave their life in the service to their country. “Grant us the grace to remember with love and reverence our valiant and fallen heroes and may perpetual light shine upon them,” he prayed. “Grant that we will always appreciate and cherish our freedom and never forget the great price that it was purchased for all of us.” Post Commander Mike Ericco welcomed the public to the town’s Memorial Day observance and veteran Norman Morehead laid a wreath at Veterans Plaza followed by the playing of Taps. Keynoting this year’s Memorial Day ceremony was Bucks County businessman and philanthropist Fred Bean who grew up in the Newtown-Yardley area and witnessed the end of World War II as a child. “They were real heroes to me,” he said of the returning World War II veterans. “And it shaped my future. “Then it was Korea and Vietnam and from then on through Afghanistan,” he said of the wars and conflicts he has witnessed in his lifetime. “I’ve lived through those things. I missed Korea because I was too young and I missed Vietnam because I was too old.” Giving a little history lesson on the holiday, Bean said Memorial Day began as Decoration Day. “And it was started by some confederate women who started decorating the graves of not only the confederate soldiers but also the union soldiers one year after the war had ended in 1866. “A lot of people don’t realize this but we lost 700,000 people in the Civil War,” said Bean. “Since then we have lost about 1.2 million people. But the thing we all have to be thankful for is the wars we have fought in recent years that were very devastating did not happen on our shores,” he said “For love of country, for the opportunity that I’ve had as a young man and to know that I’m here today because many men and women gave their lives as all of us here know about, I think we have so much to be thankful for,” said Bean. “I’m thankful every day that I’m alive for this great country, the opportunities that I’ve had,” he continued. “That’s one of the reasons as a business I work at trying to give back to the community because of the opportunities it has provided us.” Quoting World War II General George Patton, Bean said, “It is wrong to mourn the men and women who died. Rather we should thank God that such men and women lived” because of the fortitude of what they did was heroic, Bean said. “Let us always reflect on the past,” he said. “It’s so important. It’s important in how we live our lives. It’s important in how we conduct ourselves, to look forward to the future.” Following Bean’s remarks and the signing of the National Anthem led by the Council Rock North Voice, the parade reformed and continued its march south on State Street and west on Centre and the Richboro Road to its conclusion at the Post Home.