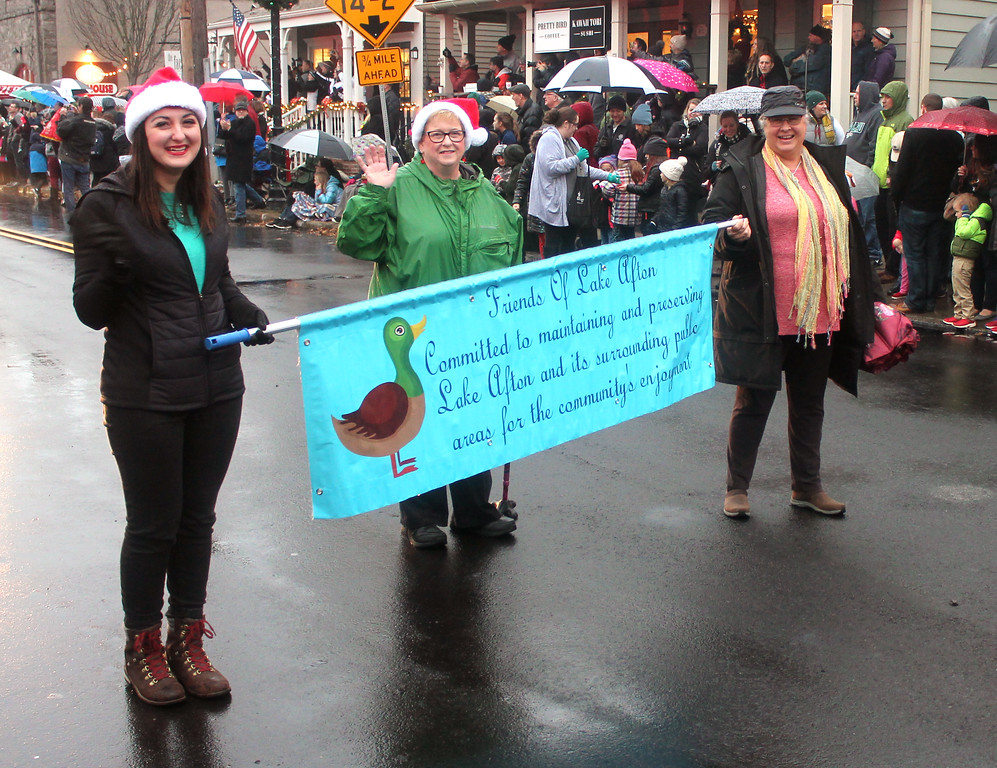 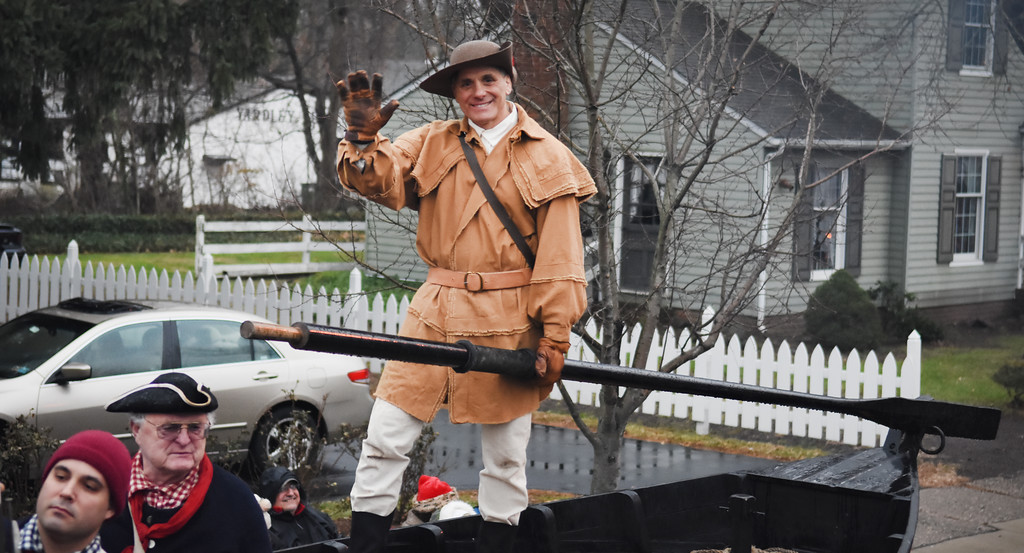 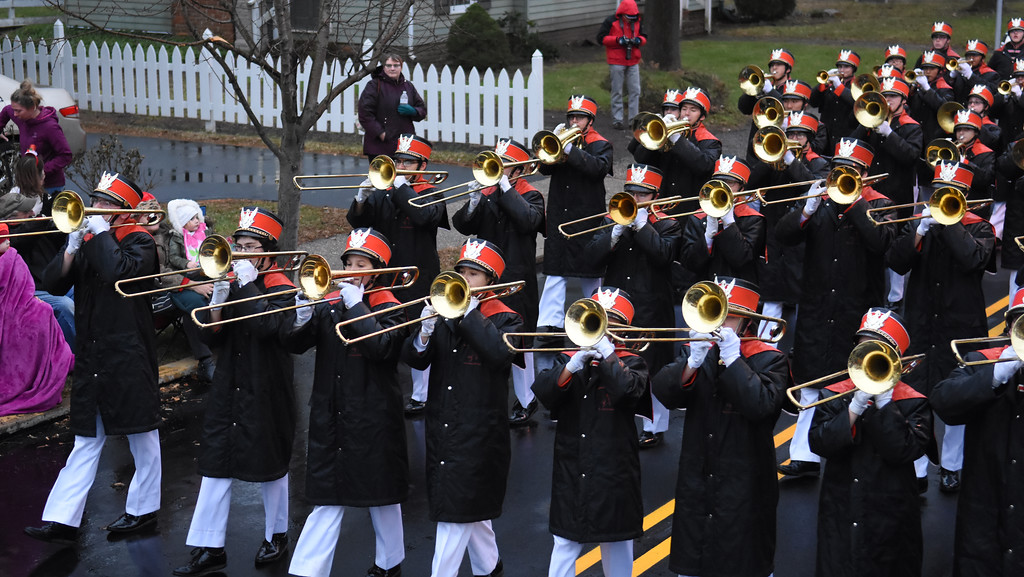 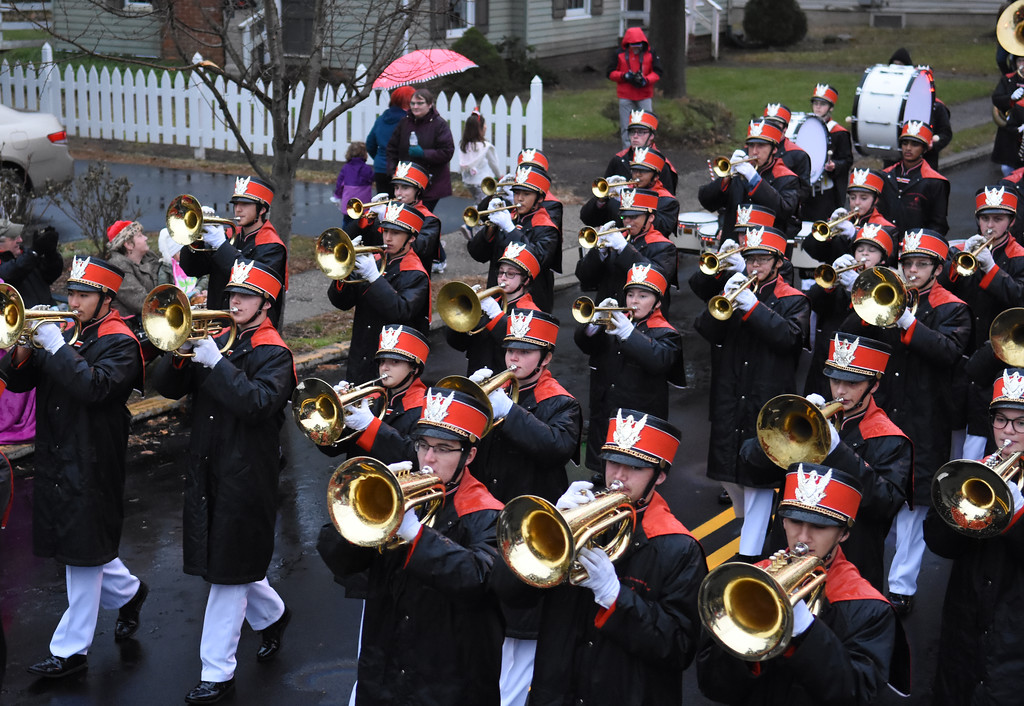 Yardley Borough >> As the first raindrops fell on the crowded intersection of Main and Afton, a sea of umbrellas opened almost simultaneously. The rain had arrived a little earlier than expected, but it couldn’t dampen the holiday spirit up and down Main Street where crowds of onlookers stood four and five people deep in spots to watch this year’s Olde-Fashioned Christmas Parade sponsored by McCaffrey’s Food Market and organized by the Yardley Business Association. Applause filled the air as an American Legion Post 317 Color Guard led the march north on Main Street. They were followed by Yardley Borough’s brand new Truck 7903, which will be dedicated to the memory of Ret. Police Chief James O’Neill on Dec. 3 beginning at 6:45 p.m. at the Yardley Borough Hall. A big rig rolled down the street honking out the notes to “Jingle Bells” as youngsters jumped up and down with excitement. BC Discoveries filled the rain-slick street with holiday spirit as they danced down Main in a sea of red, white and green As the southern rock cover band “Big Whiskey” rode by on the bed of a flatbed truck performing Lynyrd Skynyrd’s, “What’s Your Name?” members of the Yardley Business Association handed out a scared commodity these days in Yardley - bottled water. Kids and parents eagerly grabbed up the bottles as the community continued to cope with a boil water advisory from the water company. Girl Scouts marched by wearing raincoats and huddled under umbrellas, trying to make the best of the soggy situation while Grace Point Church and Riverstone Church reminded everyone to “Keep Christ in Christmas” with signs and floats featuring the Nativity scene. The Friends of Lake Afton marched by in weather conditions perfect for Yardley’s famous duck population, although their feathered friends chose to ride out the festivities in the relative calm of the nearby lake rather than chance a waddle down Main Street. Members of the Yardleyville Protective Company joined a handful of local politicians in handing out candy. Making their way along the route were State Rep. Perry Warren, Bucks County’s own Prothonotary Judi Reiss and John Lewis, chairman of the Lower Makefield Board of Supervisors. A giant Durham Boat filled with Revolutionary War re-enactors and joined by US Congressman Brian Fitzpatrick rode by promoting the upcoming Crossing of the Delaware River on Sunday, Dec. 9 and on Tuesday, Dec. 25. String bands and musical groups, including the Uptown String Band and the Bracken Alumni Drum and Bugle Corps provided the marching music. And so did the Pennsbury High School Marching Band, fresh from its appearance in the Philadelphia Thanksgiving Day Parade, which got everyone in the mood with holiday music and twirling flags. They were accompanied by school board members Joshua Woldorf and TR Kannan. Also joining this year’s parade was the Morrisville Little League, the Pennsbury Gems and the pride of Yardley-Makefield - the all-volunteer Yardley-Makefield Fire Company. With sirens wailing and lights flashing, the parade hit a crescendo with the arrival of Santa and Mrs. Claus riding aboard the Weidel Real Estate sleigh. As youngsters strained to see the man of the hour, a group of people sheltered under the porch at the Continental spontaneously broke into the song, “Santa Claus is Coming to Town.” It was one of those Norman Rockwell moments as children jumped up and down with joy, cameras flashed, videos rolled and Santa let out a jolly “Ho! Ho! Ho!” And no one even cared about the rain. Afterwards, Santa did the honors of lighting the town’s official Christmas Tree at Buttonwood Park. He then spent the better part of the next two hours listening to holiday wishes inside his very own workshop built by YBA volunteers.